Something amazing was stirring in Silicon Valley and Doug Menuez could feel it in his bones. He was twenty-eight years old, just getting off a stint in Eritrea and Ethiopia shooting the famine, and was ready for a story that didn’t feel entirely hopeless. It was around this time that Steve Jobs was fired from Apple and announced his quest to build the supercomputer that would change the world, all under his new company, NeXT.

For Menuez, the darkroom was a place of idea creation—a lot like the garage was for Jobs and Steve Wozniak. Menuez and his family lived in Del Rio Texas and Chicago before moving to Long Island when he was eight. At age twelve he created his own darkroom. At age fourteen, he covered anti-war demonstrations and roamed the streets of Manhattan.

When Menuez finally moved to the West Coast in the late 70s, he attended the San Francisco Art Institute and San Francisco State University, graduating from SFSU with a bachelor’s degree in photojournalism. After graduation, he started freelancing for several magazines, and a few of his features covered emerging stories in Silicon Valley. Though technology, to Menuez, was a little like peeling back the layers of an onion. He knew there was something there—but at the time, he didn’t know what. 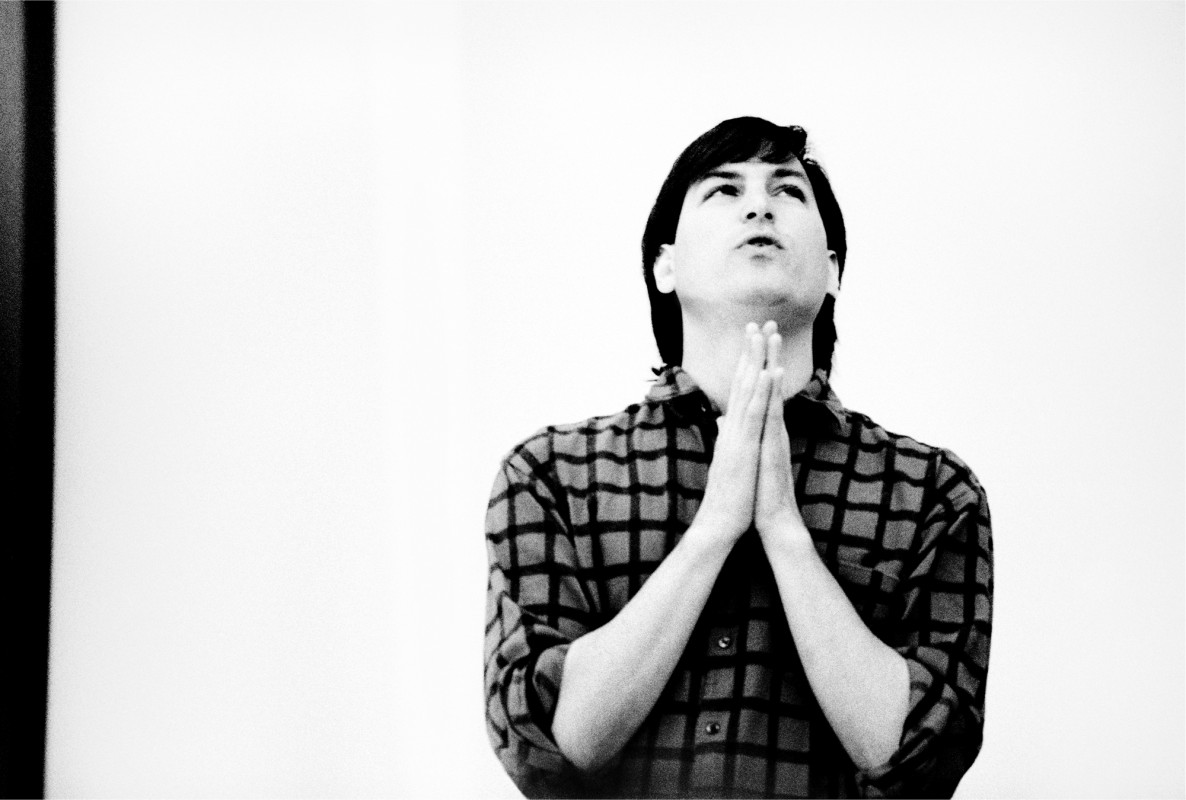 Exhortations, Incantations, Promises, and Threats. Redwood City, California, 1988. Steve gives a rousing pep talk to inspire employees while also indulging in a short rant about revenge on Apple and John Scully. The company was preparing to demonstrate the NeXT prototype at gala demonstrations in San Francisco and Washington, DC, although it would be almost another year before finished workstations would be shipped. © Doug Menuez

During the 80s, companies rarely shared anything that happened inside their walls with the public. Access was limited, even to those documenting the transformation. For a young photographer, it felt stifling. Menuez wanted to be at the forefront, capturing the turning wheels, the emotions, the triumphs and failures.

And then, in 1985, he was offered a special opportunity. Jobs granted him unprecedented access to NeXT, and LIFE magazine agreed to take on the story.

“I knew he’d changed the world already and that education was the key to almost every social issue. This seemed to be the story I was seeking. By following Steve, I could understand his process of innovation.”

So, geared with his three Nikon F3’s and an F1, Menuez set out to capture the idealistic engineers of Silicon Valley. He watched as they played with a beach ball at a company picnic, acted out crude humor at an Adobe Halloween party, went skydiving to blow off some steam, exercised in “bunny suits” during a break, and even brought their babies to work. All of this was documented in over 250,000 photographs.

The resulting project was Fearless Genius, an eyewitness account into the lives of several of the biggest tech visionaries of our time. 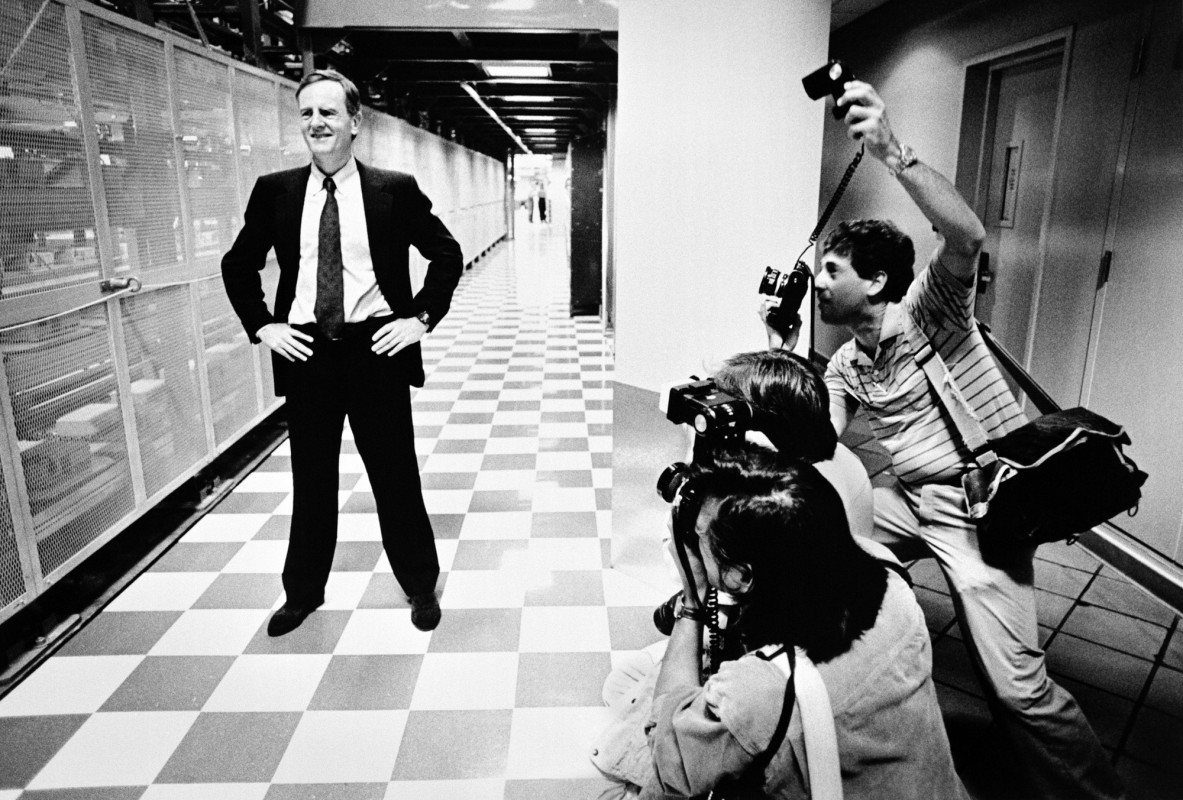 John Sculley Masters His Shyness to Meet the Press. Fremont, California, 1990. Apple CEO John Sculley overcame severe shyness and stuttering to become an excellent public speaker, able to easily greet the press at an Apple factory in Fremont. John was convinced by Steve Jobs to leave Pepsi and join Apple in 1983. Steve challenged John, asking if he wanted to sell sugar water for the rest of his life or change the world? After forcing Steve out, John grew Apple from $800 million to $8 billion a year in revenue, but he was dismissed in the Valley as the man who fired Steve and as a technology lightweight. At the height of his power, in February of 1993, he sat next to Hillary Clinton on national television to watch President Bill Clinton’s first State of the Union address. But by then John knew that despite outward appearances, Apple was in chaos, unable to rewrite its operating system and innovate. Its profit and market share were dropping fast. His bid to save Apple with the Newton device was too late. A few months later he was gone, ousted from Apple in another boardroom coup. © Doug Menuez

What drew you to Silicon Valley? Initially my interest came after seeing the Mac and getting a sense that Steve Jobs represented an avatar for a new generation of innovators. By shooting Steve I thought I could tell the story of this hidden tribe that was creating a new culture and seemed to have the power to change our lives. And I personally needed to find hope that the human race was not doomed to destruction.

I can’t imagine being there during the dot-com revolution, when ideas were coming to life—some ideas that are still relevant today. What was it like? Once I got access, being there was a mix of visually boring and static environments where people were staring into screens or sleeping under their desks, and an electrifying swirl of brilliant, driven people sharing crazy ideas and willing to sacrifice everything to accomplish this impossible stuff they were planning.

There was a firehose of money pouring into the Valley so anyone with an idea was starting a company. This was a gathering of the absolutely most brilliant and talented people, pushing themselves as hard as they could 24/7. They were idealistic and passionate about inventing tools to improve human life. They knew they’d make money, but that was secondary, truly. It was all about inventing cool stuff. And it was a bit like Paris in the 20’s must have been like with famous artists and musicians from around the world coming through Silicon Valley to learn about these new digital tools they might use. And it would change our culture. I felt sometimes that I’d been given a private ticket to the future because many of the things they were attempting to create were eventually successful.

Why Steve Jobs? So many people were innovating at that time. Jobs had just been kicked out of Apple. Why him? Of all the people in tech, Steve was the first to bet the company on a humanist vision for building computers that mere mortals could use. Computers should leverage our brains was the idea. This vision came from Doug Englebart and brilliant scientists at Xerox Parc. Steve took their ideas and made them better and practical for the market. The alternate, opposing vision being funded by the defense department was about artificial intelligence, where computers would eventually replace our brains—which could end in a Terminator or Borg kind of disaster if the machines gained control.

Steve wanted tools that would unleash human creativity and empower the average person. His ideas were enormously seductive to anyone idealistic. Plus, Steve himself was a great story of brash success with having actually changed the world twice at that point. Then he’d failed publicly and was humiliated and started over. The stakes for him were high. He was a symbol and entry point to tell the larger story of the digital revolution underway. That larger story was not being covered in a consistent way at that time.

Aerial Photographers share their experiences with both drone and helicopter-based aerial...

What You Need to Know About Flying Drones Commercially

A round-up of rules, opportunities, and limitations for the fast-growing drone photography niche.